Written by Christine Johnstone on 21 September 2017. Posted in Uncategorised.

The first Asia-Pacific Ministerial Summit on the Environment was held in Bangkok, Thailand, from 5-8 September 2017, jointly organized by the Economic and Social Commission for Asia and the Pacific (ESCAP) and UN Environment.

This meeting was attended by Soroptimist International of the South West Pacific, Programme Director Di Lockwood.

Di writes for us on the Soroptimist experience at this important UN meeting. 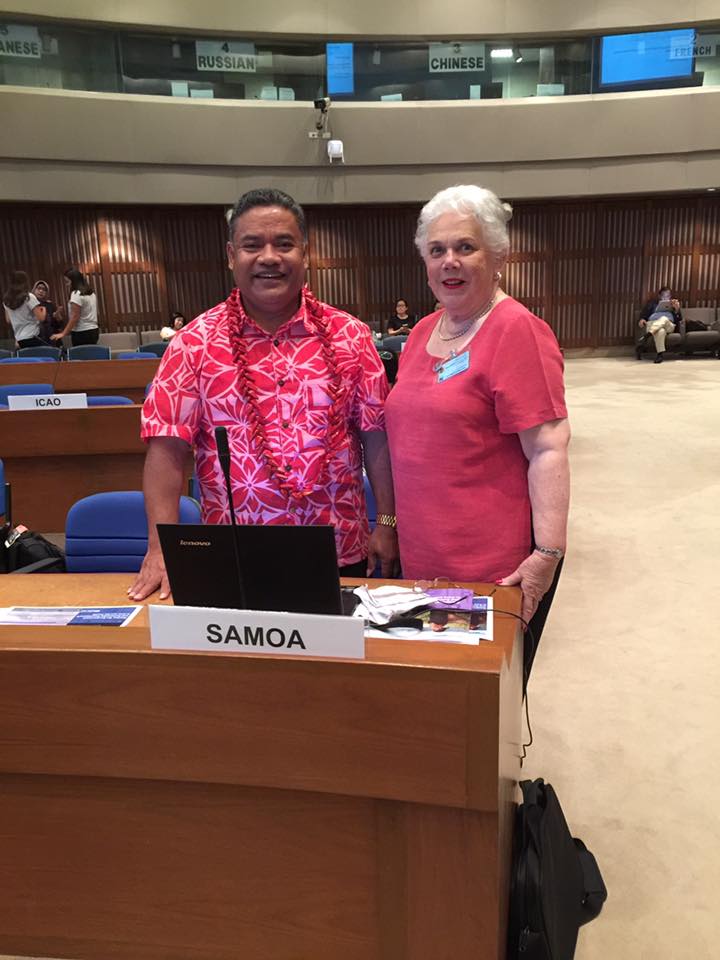 This meeting, held at the ESCAP building, had 3 parts. A CSO forum on the 4th was followed by two days of senior officials meeting to plan the Ministerial statement for the UN Environment Conference in Nairobi later in the year and the final two days was given to Ministerial statements and the finalisation of resolutions. All were around the theme of “A Pollution Free Planet.”

The CSO Forum had three components. The first was an overview of Pollution in the region, the second a review of local action and finally a vision of what a pollution free Asia pacific could look like. Among this was also the crafting of a CSO statement and the planning of CSO interventions when permitted in the programme

Pollution in the region is vast, largely as a result of population increases, rapid industrialisation and a rural to urban drift, coupled with a lack of awareness, a lack of data and monitoring and of budget. Air pollution from cars has increased and both old and new sources of pollution have multiplied while growth indicators are based on consumption and production. Plastic pollution is extensive and wide reaching and is affecting oceans, fish and hence humans through their food.

Pesticides are polluting air and water. Over 7 million deaths in the region are a result of air pollution. 5.3 billion pounds of pesticides are used in the region each year with subsequent poor effects on soil, water, crops and health. Similarly hazardous pollutants arise as a result of processes and practices in manufacturing and the 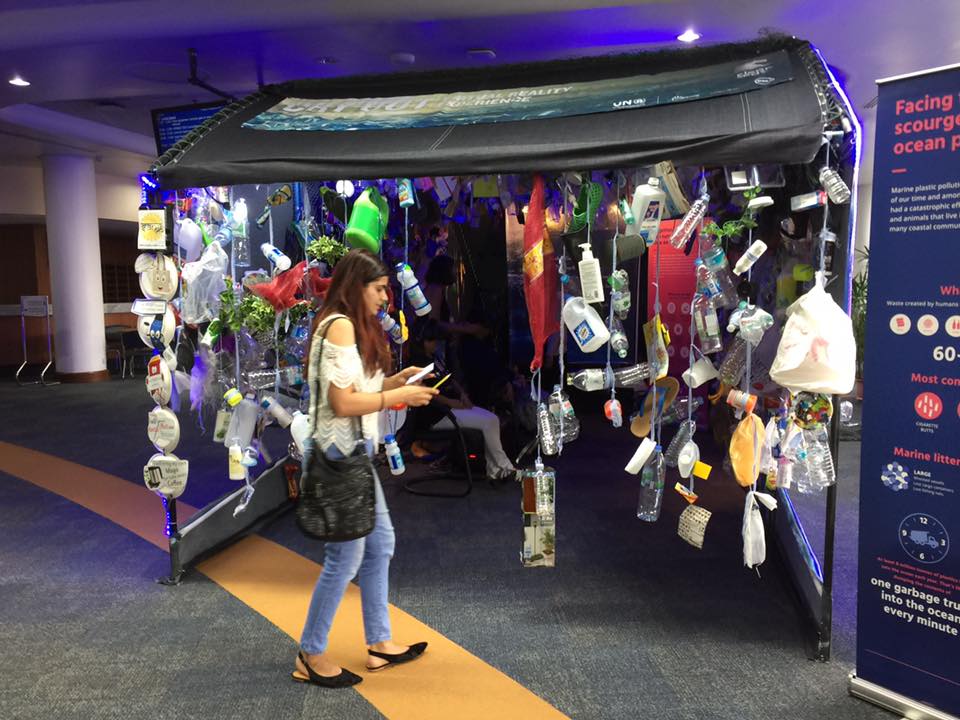 percentage of fatal accidents in developing Asia is four times higher than in developed countries and 64% of the world’s 317 million injuries are to be found in SE and West Asia. Militarism is also a factor. Increased expenditure, ocean filling and reclamation and the volume of toxic waste left by the US have all had effects on health and the marine environment.

The second aspect, that of review, was varied. Local responses were mixed. In some areas ignorance or toleration have had little impact on issues while in other areas local action has had mixed results Governments’ bodies tend to operate in silos which delay effective action , very few effective regulatory processes exist although UN Convention and Transnational corporations which do exist may be overlooked or underused. Some local action does take place but monopoly control of food and agriculture has had deleterious effects. Awareness building on the impact of pollutants has been important. A practice of community action is emerging and social movements are important as a means of mobilising pressure on governments and businesses.

A vision of a pollution free Asia pacific region is seen to be possible given examples elsewhere in the world. For pollution free oceans it is seen as important to invoke Agenda 21 principles with the SDGs and to promote producer responsibility for the life of a product. Agroecology can be pursued by noting that it makes sense economically as yields can be improved markedly. There is a belief that green jobs, limiting greenhouse emissions, managing waste pollution and protecting and restoring ecosystems is possible with funding that recognises priorities and is willing to use partnerships.

An interesting comment on the impact of pollution was that,” we had early warning but a late reaction.”

There was considerable discussion about technology. Seen by some governments as the solution to many issues, it is in fact controlled by businesses and parachuting it into an environment may not be the best solution. Technology is not usually the answer to a problem that is not technology based. Technology is not gender blind and we should always check if it will help those left behind. It needs to address the real needs and reflect the realities of communities. Often local innovations can be most effective. Consider GM seeds. Four transnational corporations control 75% of seeds in the world and some laws mean that farmers cannot use their own seeds from their crops. 70% of the food in the world is produced by small farmers using agro-ecology. Is there a real need for GM seed? Who is benefitting?

There followed some interesting examples of effective community action to prevent or mitigate environmental damage.

Days 2 and 3
Officials Segments
The start of the Senior Official section saw some formalities of elections etc. It was interesting to note the significant role being taken by Fiji and Samoa. 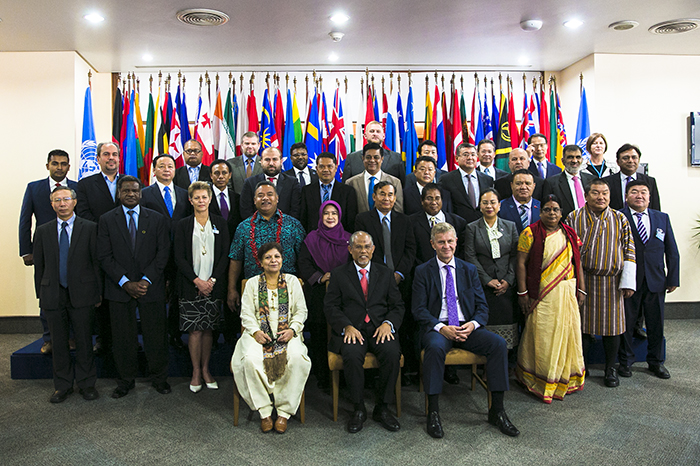 The official welcome stressed the need for care in city infrastructures and the need for the Asia Pacific region to be “less resource heavy”. The Executive Secretary of ESCAP spoke of the need for a healthy environment to ease the burdens of poverty and climate change. Asia Pacific is a high user of resources and the pace of growth is rapid with a middle class, that wants products, increasing by 270%. The underlying drivers are economic and structural changes are improving resource efficiency. To promote human well being careful policies are needed and countries need to examine macro forces .It was argued that steps Asia Pacific countries need to take are; 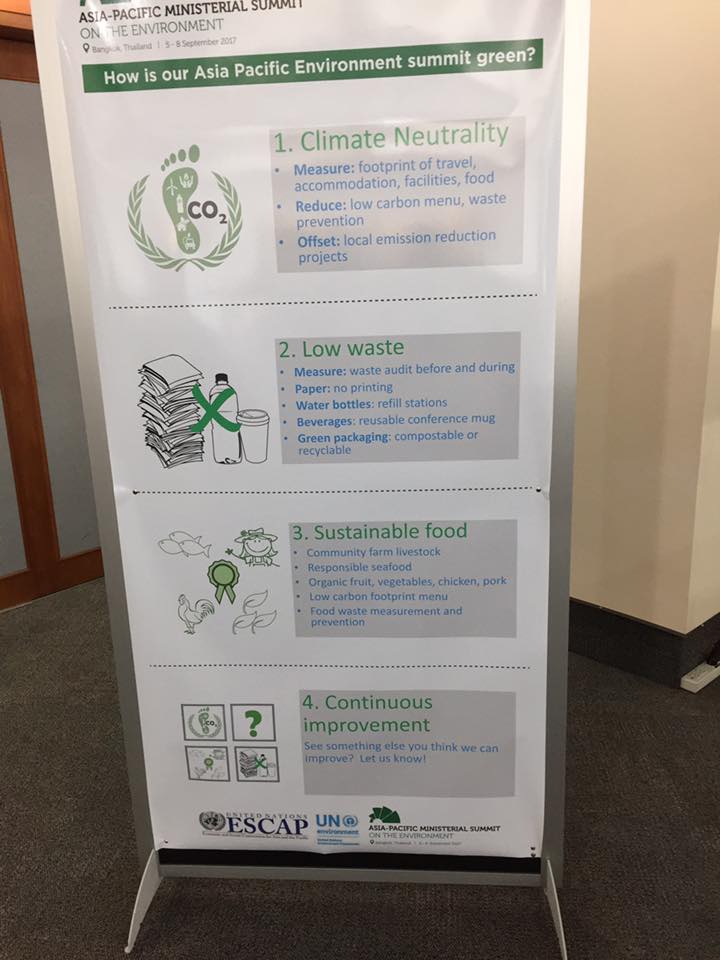 This was followed by an interesting intervention by a representative of the Global Group of Scientists for Sustainable Development. They argue that the SDGs are vital for the future of the people and the planet. Three pillars – economic, social and environmental need to be inseparable and that a transformation of attitude and activity is needed. Earth and its resources are limited and we are already reaching critical levels for the biosphere in some areas. Countries need to be aware of a country’s “carrying capacity” i.e. the environmental capacity boundaries.

Conservation is not being taken seriously as a way to guarantee the welfare of people. Forests are vital in this and supply up to 70% of needs for some. Developing biodiversity is vital to assist poorer people in some regions Sustainable agriculture, green industry and transport and limiting consumption are all possible and sustainable, We also need a transformation in our attitude to the experience and knowledge of indigenous people who can sustain biodiversity. We need to combine natural resource management with scientific knowledge and share information widely.

A panel on Policy Perspectives towards a Resource Efficient Asia Pacific produced some interesting points although there was agreement that the driving forces of population , consumption and production were unsustainable. Japan is using Interlinked targets and indices on the environment and has focussed heavily on intensive promotion of the 3Rs – Reduce, Recycle and policies Reuse with a 54% reduction in waste and 74% in other areas.

Sweden has had a gender focus and has seen resource management as a human issue. It has undertaken reform to give women access to policies, finance and cross cutting issues. It is pushing a green energy approach with gender as a business case. The Philippines focused on urbanisation and the need to establish resource efficiency in rapidly growing cities. The government has sustainable cities laws which must be followed but little detail was given nor a statement about effectiveness. 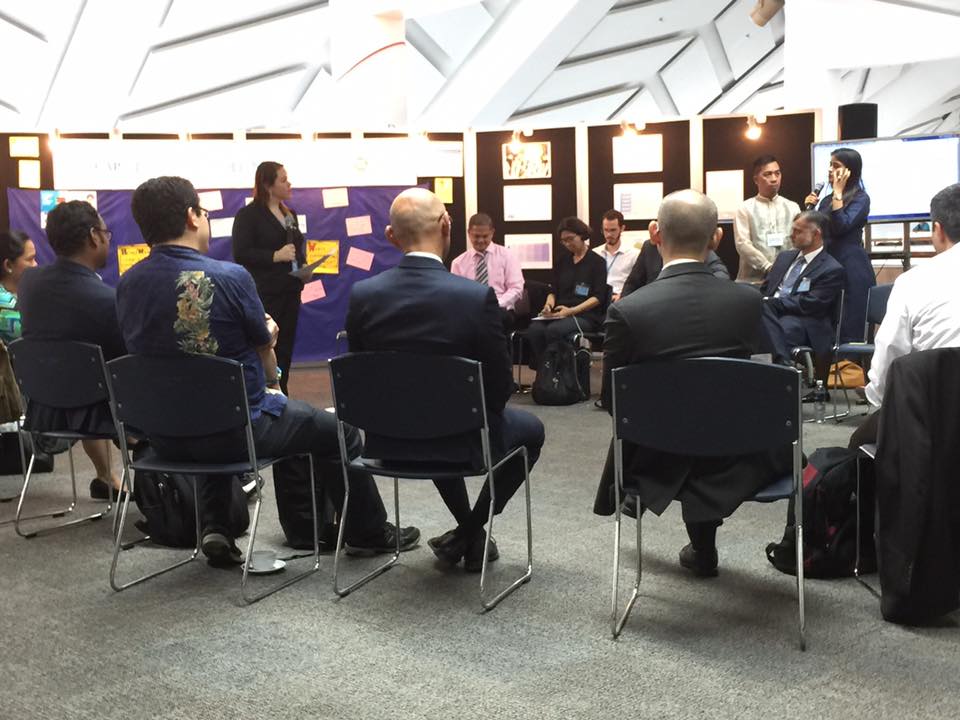 A number of countries made interventions which had their differences but common to all was the belief in resource efficiency as vital as well as the fact that we have a shared responsibility for the global situation. As Iran stated “ There needs to be a collective move to a paradigm shift in attitude and practices.”

Days 4 and 5 Ministerial Segment
These days were better attended as Ministers and their staff members were more evident and some CSO were in the chamber for much longer, It was interesting to watch some jostling to ensure that they were in the front row.

The first significant activity was a Review of Regional priorities and progress in the Asia Pacific Region given by Dr. Sirin

The progress and implementation of 41 countries was considered Progress was noted in:

Interventions by about 10 countries reflected government activity in these areas but in some countries the scale of the problem is enormous and they have indifference as a major issue. Creating a groundswell of awareness and information is vital and community organisations can play a big role here. All countries that commented were endeavouring to bring about changes particularly for marine litter and resource efficiency. There is of course a strong possibility of a difference between what is stated in legislation and what is happening.

The theme for the 2017 UN Environmental Assembly is a pollution free world, Why is this being addressed?

We need life cycle thinking to avoid a revolving door approach and we need to change consumption behaviour. Political will is essential plus we need a committed citizenry that will commit to action, sign the Clean Planet Pledge and tell the stories of pollution and its effect. We need targeted technology that addresses pollution consequences.

Despite the difficulties it can be done. The fight against slavery was won, black and white skinned children attend school together, most common diseases that used to kill thousands have been eliminated .It is a matter of political will, leadership, services and organisation

So what can Soroptimists do?
As individuals we can:

As a club we can

As an organisation we can

For more information on summary highlights of the meeting visit: Ministerial events 2017