Written by Christine Johnstone on 23 April 2021. Posted in History thru the Decades.

The decade when the Vietnam war escalated, inflation spiraled, and email was invented, little did re realise how the invention of email would become the main source of written communication and the empact on our lives. The decade that SISWP finally come of age, when we cut ties with SIGBI and become a separate identity of Soroptimist International
The Soroptimist International President attended the first United Nations WomenвЂ™s Conference in Mexico city. This conference produced the World Plan of Action вЂ“ the General Assembly endorsed this plan and proclaimed 1976-1985 the decade for women with three objectives equality, development and peace 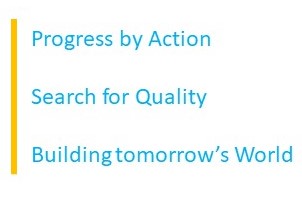 SI Introduces in 1979 the 6 areas of program and the introduction of 6 programme coordinators. Human Rights and Status of Women, Education , Economic and Social Development, Environment, Health and Goodwill and Understanding.

1979 saw the first discussion of what was to formally be known as Project 5-0, joint project work by Soroptimists, Association of Country Women of the World, Zonta, International Council of Women and International Council of University Women.
With the introduction of the UN General Assembly of the Declaration on the Elimination of all forms of Discrimination against Women, Soroptimists in this decade increased their advocacy efforts here in Australia to use this as a tool to advocate at national parliaments to end laws which discriminated against women especially the law which prevented married women from taking up work either full time or part time.

In our Federation, 1971, saw Soroptimism expand to a 3rd country with the charter of Suva in Fiji, and we formally became known as the Council of the South West Pacific. Clubs were now chartered in Victoria, Tasmania, Queensland, South Australia and Western Australia, New Zealand and Fiji. The Committee decided the first joint project by the Council would be to provide 3 scholarships for women in the Pacific to attend the Community Education Training Centre in Suva. 3 women were chosen Lote Naseri from Samoa, Evisi Jino from South East New Georgia and Alisi Mafi from Tonga.

We were still formally a part of the Federation of SIGBI, and for the very first time a Soroptimist from the southern hemisphere was elected President of SIGBI, in 1972 Thelma Jarrett a Soroptimist from Melbourne Victoria, became the Federation President of SIGBI, quite a feat when communications were via snail mail and expensive telephone, and 1973 saw a combined Clubs of the South West Pacific conference, and for the first time in the southern hemisphere a Federation of SIGBI conference in Sydney Australia, enabling many Soroptimists from the Council of the South West Pacific to attend their first every Soroptimist Conference. Thelma noted that вЂњSoroptimists find themselves on unfamiliar ground in a rapidly changing world as we entered the new decade. The world faces a hunger problem, population problem, pollution problemвЂќ, how true this statement is still today. she asked members if they were doing enough with each other the UN agencies to meet the challenges.  You can read some further information about Thelma here  It was at the conference of club, that Wollongong Club member Nancy Cram was installed as President of the Council of the South West Pacific, and announced that talk of a Federation was done with, Action was needed and set about with determination to achieve the goal of a Federation of the SWP. Soroptimists from the Council of the South West Pacific and SIGBI continued to work towards forming the new Federation 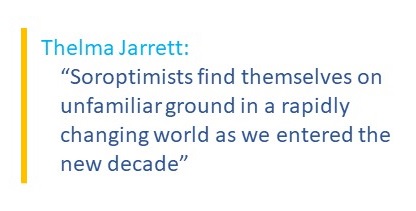 Throughout 1976 and 1977 the Committee of the Clubs of the SWP, continued to work with the Federation of GBI and Soroptimist International on the paperwork required to formulate a new Federation. SIGBI being asked to develop the information required for the formation of a new Federation, and this to be reviewed at the 1977 SI Board meeting. Communication between Sydney and London became slow due to surface mail often not having sufficient postage, and documentation and letters often crossing in the mail. Maris King had to draft a constitution, present to the IBM in April 1977, Nancy Cram representing the clubs of the South West Pacific attended the Soroptimist International Board meeting in Washington in 1977, and took along copies of the proposed constitution, once a decision was made, Nancy immediately telegraphed the success of the application of our own Federation. In November 1977 the clubs of the South West Pacific had to vote on the new Federation, there was only one club opposed to it, with the requirements of the club votes, financial settlement and the constitution having been met, it was not possible to concentrate on the preparations for the inaugural conference in Adelaide. There was still much to do in the way of documentation, financial budgeting, manuals of duties, procedures, extension, membership and classifications and a Records of Decisions to be written.
The extension officers were also busy, attempting to reach the challenge of 100 clubs by 1980, given by Maris King, in 1978 there were now 92 clubs, and by 1980 the target was met.
A Charter organising committee representing each club was set up under the chairmanship of Olive Johnson, there were to be many overseas guests including the International President Hilda Richardson, along with SIGBI President Kathleen Collin, President SI Americas Dorothy Kissinger, President SI Europe Dr Edith Frederiks. At the official charter dinner on the 24th of March 1978, at the Conference of the Council of the South West Pacific in Adelaide South Australia, Her Excellency, (Australian High Commissioner to Nauru) Maris King, M.B.E. received the regalia of the Office of President of Soroptimist International of the South West Pacific from Soroptimist International President Hilda Ritchardson. Each member at the dinner was presented with a name tag with an Australian wildflower hand painted by Vera Bates, and the menu featured a Hans Heysen print on the cover. At the ceremony was a parade of flags of the countries involved, and a parade of Soroptimists representing significant landmarks leading to the Federation.

Carawah (Victoria) was the last club to receive its Charter as a member of the Federation of Great Britain and Ireland and Wagga Wagga club became the first newly chartered club in the South West Pacific Federation.

The conference conferred Honorary Membership on Nancy Cram in recognition of her determination and efforts in achieving the Federation.
SWP members were elated when their federation project вЂњScholarships for the community Education Training Centre in SuvaвЂќ, was accepted as the international project for the 1979-1983 quadrennium, this was one of two projects chosen for the quadrennium. World Wide 250,00 dollars was raised for scholarships.
During this decade The Muriel Barber Extension Fund was set up in recognition of Muriel Barber who had been elected Chairman Elect of the Committee, but tragically passed away before taking office, Muriel had written the first Extension Manual.

1975 The United Nations formally adopted International WomenвЂ™s Day on the 8th of March, the celebration of a WomenвЂ™s Day has enabled Soroptimists worldwide the opportunity to advocate for gender equality.

The last year of the decade saw a club chartered in Western Samoa in 1979, and SISWP set up HQ at the WomenвЂ™s Club building in Elizabeth St Sydney and the first project of the new federation was the provision of school books for children in the Pacific Islands.

The Vice PresidentвЂ™s badge was unveiled at the Conference held in Canberra, it was a letter вЂњSвЂќ for Soroptimism made of pearl shell for Australia and the Pacific Island countries and paua shell for New Zealand set in gold and silver.

1979 120 Soroptimists from the new South West Pacific Federation joined with key delegates and more than 2000 members on the Hawaiian Island of Oahu, for the 11th convention. President Hilda Richardson opened her Presidential address - вЂњHere comes to-morrowвЂќ, вЂњI have a vision. A vision of an organisation that is not afraid to change its way of working, then can keep pace with the world that is changing day to dayвЂќ. The 120 members from SWP were honoured by a Welcome Breakfast hosted by Lida Brambilla, then Chairman of the International Extension Committee.
Soroptimist International of the South West Pacific had come of age, thanks to the hand work of many Soroptimists who believed. 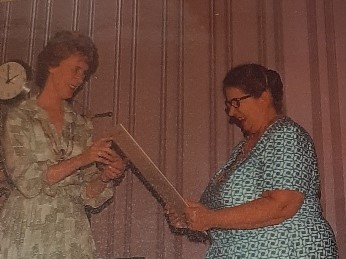 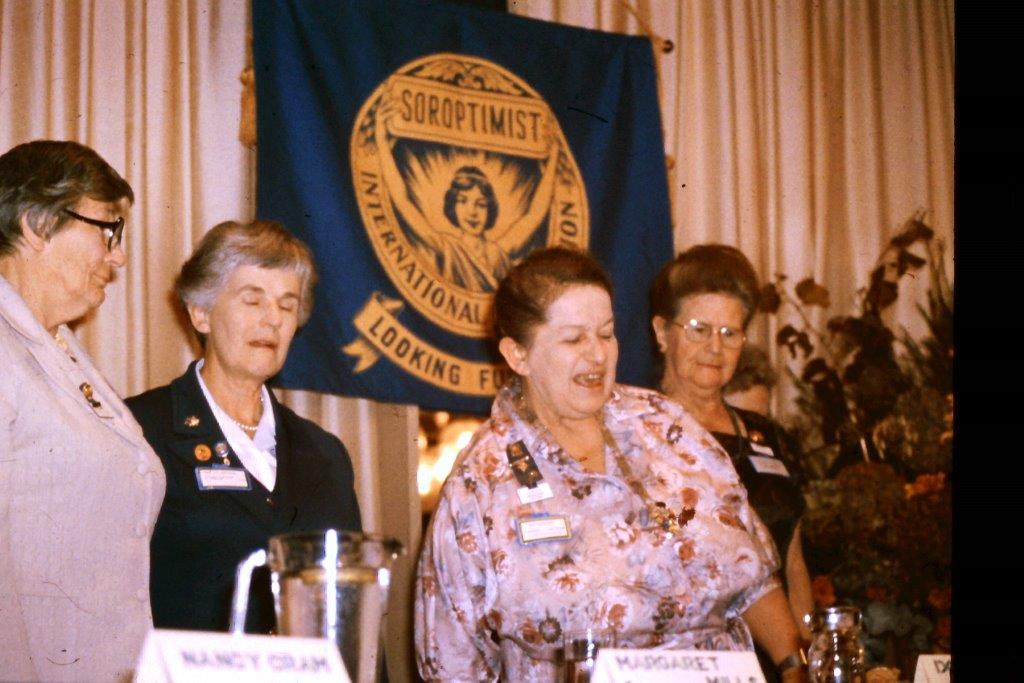 Note the emblem with the International Association wording in the background 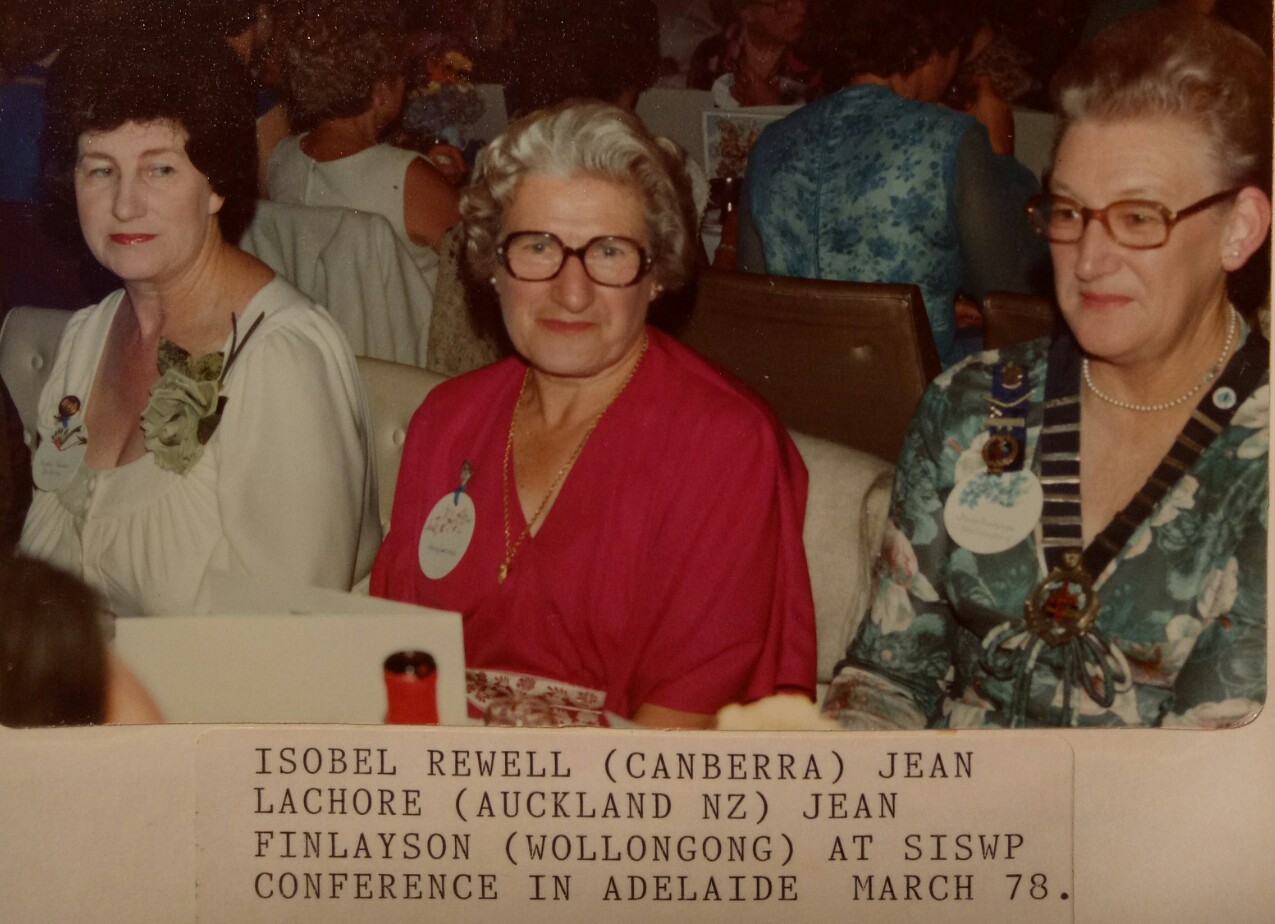