Written by Christine Johnstone on 05 August 2021. Posted in History thru the Decades.

The 80's decade, big hairdo's, bright clothes, shoulder pads, large velvet scrunchies for our hair, the introduction of spandex, leisure clothes, Nintendo arrives with the biggest ever gaming console. the invention by Sony of the Walkman, music on the go, the casette tape, how we loved to make our own music playlists, Michael Jackson singing "Thriller", and Michael J Fox in "Back to the Future", which is what this blog is about;  In 1983 Sally Ride, became the first American woman to go to space.

Several SI International President's represented Soroptimists at the various meetings for the "United Nations Decade for Women  (1975 to 1985)", with Dotti Kissinger collaborative effors for a general statement, calling the attention of delegates to the strength and resources of NGO's , urging governments to secure input and particularly recommendations from NGO's for the remainder of the decade.

5-0 Pilot Project was conceived, in the previous decade Muriel Morse had started on the suggestion of 10 million members of the 5 International womenвЂ™s organisations cooperating on a special project. Three Presidents (Soroptimist International, Association of Country Women of the World (ACWW), and International Council of Women ACWW) suggested the theme of provision and organisation of vocational training schemes for the underprivileged. This idea would be put to Soroptimists at their pre Convention Board Meeting in Honolulu. It would take another 3 years to launch the pilot project in Calcutta.  It was a non formal education for under privileged women in a centre made available by the Bengal Bratachari Society the women were to acquire skills in literacy, tailoring, weaving these skills would provide them with the capacity to earn a living.

At the 1981 Barbados convention SI was celebrating 60 years of service.  Barbados was one of only three Soroptimist nations to ratify the Convention on the Elimination of all Forms of Discrimination Against Women, (Mexico and Sweden being the other two.) At this board meeting in Barbados SI agreed to apply for Category 1 status with ECOSOC

1984 Soroptimist International was granted consultative status with ECOSOC at the UN, SI was one of 5 womenвЂ™s organisation to achieve category 1 status.

1989, Laurence Deonna a member of the Geneve Rhone Club in Switzerland received the UNESCO Education for Peace Prize.

South West Pacific
170 Soroptimists from the SWP travelled to Hawaii for the SI International convention, and were welcomed at a special breakfast hosted by Lida Brambilla then chairman of the International Extension Committee, they were able to participate in workshops held by each of the new 6 Programme Coordinators. Soroptimists were also able to hear the Principal of The SI and SWP Project вЂњSouth Pacific Community Education Training CentreвЂќ,  ( who also was a Soroptimist) speak about the benefits the scholarships were providing to the women.

Whilst technology and virtual meetings have became a integral part of how we do business in these COVID times, what might be the first virtual meeting held ever occured in 1980 when Betty Loughhead then President Elect and Sylvia Spear (future Federation Secretary), along with other officers spearheaded a satellite link. A satellite which was above the South Pacific had completedits weather experiments, the PEACESAT Project was implemented providing opportunities for consultations and development programmes in health, education and community services between Soroptimist clubs.  Soroptimists from the SWP gathered at PEACESAT stations in New Zealand, Fiji, Tonga, Australia, Western Samoa and USA. Thousands of miles apart, Soroptimists from two Federations were linked in an exchange of news and views. Later two other Federations Europe and GBI were able to join, these links ups made Soroptimists more aware of the International aspect of our movement. Read more information from SWP member (past Federation and International President ) Margaret Lobo, Dolores Caboche and Carolyn Hudson here. 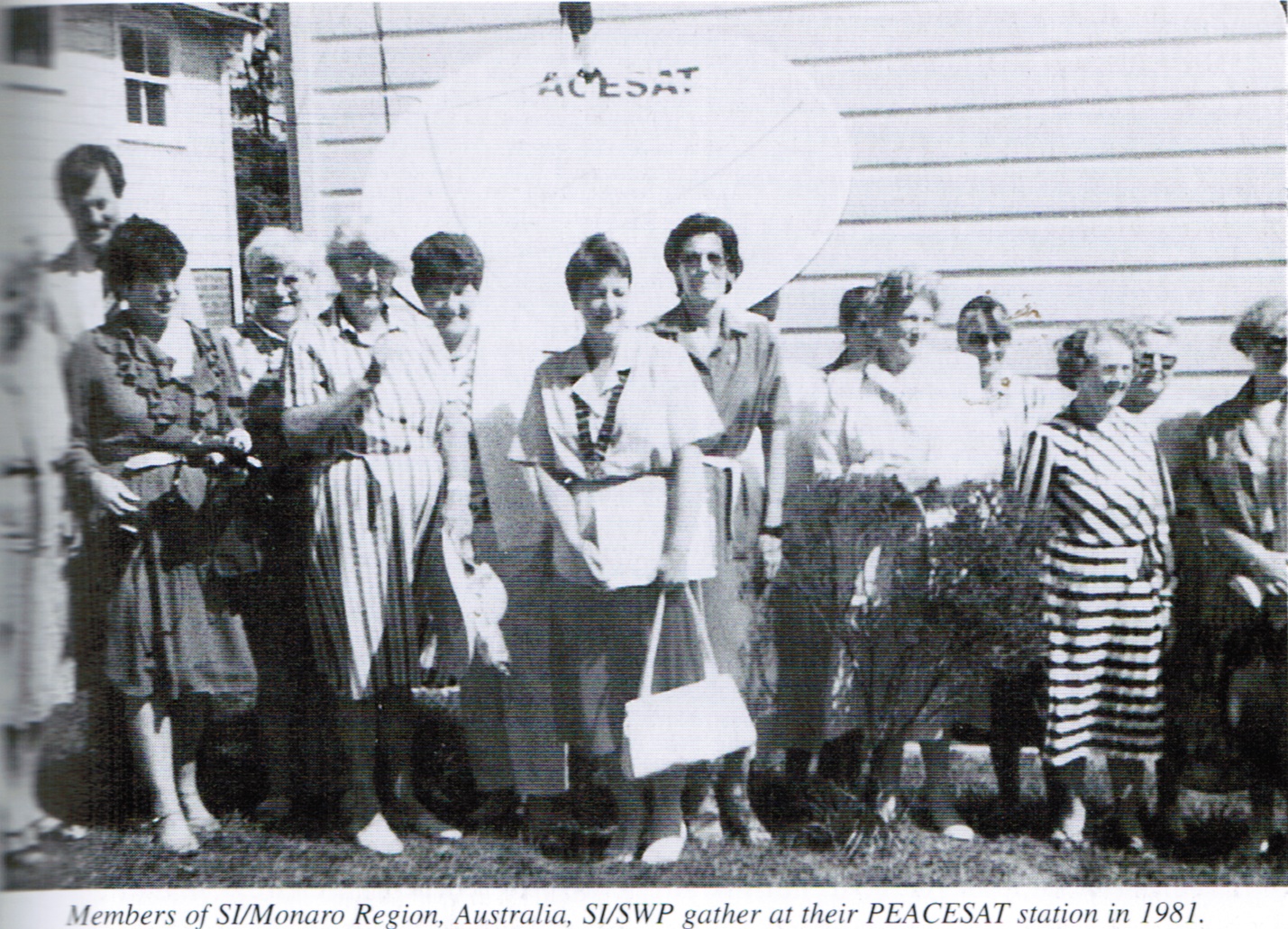 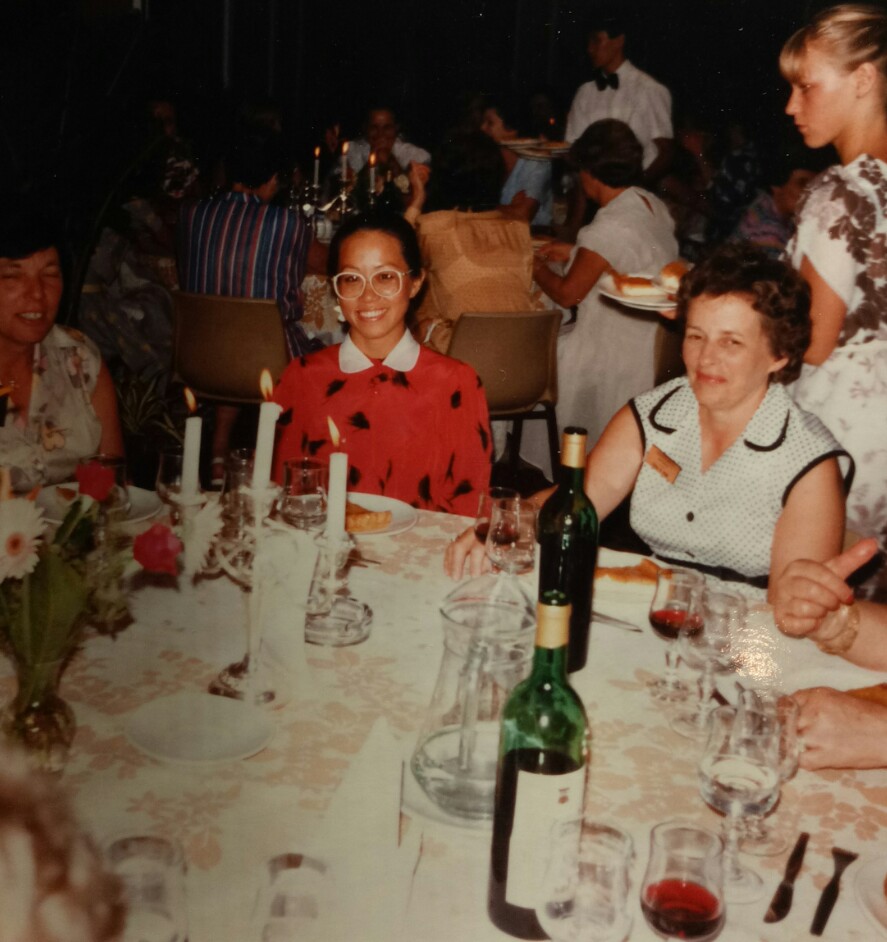 d by Singapore in 1983. In this Biennium Maris King and Joy Clark were tasked to investigate methods of obtaining government subsidies for Soroptimist overseas aid projects, A Soroptimist Development Programme Committee was formed in New Zealand and Australia, with both governments formally recognizing SWP as an NGO, both these actions opened the way for overseas aid grants, with the Region of Victoria receiving funding to go to SI Tonga for a training program to upgrade the skills of WomenвЂ™s Interests Officers and WomensвЂ™ Club Leaders in the South Pacific Area to enhance womenвЂ™s contribution to rural development. By 1986 the program was in full operation. The New Zealand committee obtained subsidies for the Water for Senegal and Project 5-0 both Soroptimist International projects.

Picture to the left shows Evonne Tylor at chartering of SI Noumea 1983.

Betty Loughhead was to be nominated for the SI Presidential position and took up the position in 1983 at the Istanbul convention. BettyвЂ™s theme was вЂњChallenge of ChangeвЂќ this was to be through вЂњAwarenessвЂ™ of the problems which faced the world, вЂњAdvocacyвЂ™ which Soroptimiists could bring to be on every aspect of life, and вЂActionвЂ™ as individuals, club, regions and Federations of problems which affected all humanity, not just women and girls.

During this decade SWP purchased offices at 187 Macquarie St, Sydney, a permanent base to operate from.
Soroptimist International sought to have its ECOSOC status upgraded to Category 1, this began in 1983, but the business was not completed and was carried forward to 1984, Hilda Richardson and Alice Wandera led the committee and made 7 points as to why SI should be promoted, and SI were successful and joined the ranks of 32 NGO's with Category 1 status.

Dolores Caboche as SWP President and Maris King as SI Procedural Consultant joined with Betty Loughhead (SI President), to attend the end of  the "Decade for Women" Conference in Nairobi, this was to be the largest gathering of women the world had ever seen, which took place in July 1985, stating that the benefits of the decisions taken at the Conference will not be felt for several years, SI as a Category 1 Non Government Organisation had the opportunity for input.

Whilst we celebrate 100 years with the C100 Tree Planting project, there were notable projects undertaken by clubs in the 80вЂ™s, SI Charters Towers (chartered in 1985) organized the planting of several hundred trees in Centenary Park, SI Townsville had a vision of an Adventure Playground for the handicapped on the harbour foreshore stage 1 was completed at a cost of $170,000 of which public funding provided $130,000., the Region of South Australia embarked on a similar playground.

Five O
The five Presidents decided on the name "Five-O" (O = Organizations) and agreed that the initial objective would be to establish a training centre on each of five continents, each of the five organizations selecting an appropriate location and establishing a Steering Committee of the local members to develop detailed proposals. In 1982 UNESCO agreed to include Project Five-O in its Co-operative Action Programme.

Members from SWP readied themselves to host an International Convention in 1987, to be held in Melbourne Victoria.

Draft policy statements were sent to all members for discussion at the 1987 Board Meeting to be held in Melbourne, Employment, Equal Rights, Development of Women in the roles of decision makers, Technology Development, Education and Functional Literacy Programme, Refugees and the responsibility for their involvement in planning and participation were among some of the areas for discussion.

As the decade was drawing to a close the world faced the emerging of the Aids epidemic,  Soroptimists have continued to work on the elimination of HIV to this day.

This decade saw two (2) SWP Scholarships founded, it should be noted that both of these Scholarship are still current.

To commemorate the contribution by Dame Margaret Blackwood (1909 - 1986) to the Soroptimist community and celebrate her academic achievements a scholarship was established in 1987 to perpetuate her memory. The scholarship was to enable a post graduate student of Genetics in the fields of any one of plants, animals or viruses to study at the University of Melbourne the first scholarship was awarded in 1991. Read more about Dame Margaret here

The Betty Loughhead Soroptimist Scholarship was founded in 1987 to honor the first International President by a Soroptimist from the SWP. It is open for women over 25 years who want to improve their qualifications, complete a course or change to another career.

Images from the 1987 Convention